Our Toronto foot clinic, Academy Foot and Orthotic Clinics has been providing High Quality Custom Foot Orthotics to patients in Toronto, the GTA and Ontario since 1980.  Our Downtown Toronto Foot Clinic has been making 1000's of patients happy with high quality Foot Care and Orthotics since 1980! 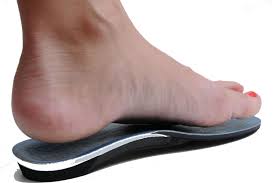 Orthotics, also known as orthoses, refers to any device inserted into a shoe, ranging from felt pads to custom-made shoe inserts that

correct an abnormal or irregular, walking pattern. Sometimes called arch supports, orthotics allow people to stand, walk, and run more efficiently and comfortably. While over-the-counter orthotics, they normally cannot correct the wide range of symptoms that prescription foot orthoses can since they are not custom made to fit an individual's unique foot structure.

Orthotic devices come in many shapes, sizes, and materials and fall into three main categories: those designed to change foot function, those that are primarily protective in nature, and those that combine functional control and protection.

Rigid Orthotics
Rigid orthotic devices are designed to control function and are used primarily for walking or dress shoes. They are often composed of a firm material, such as plastic or carbon fiber. Rigid orthotics are made from a mold after a podiatrist takes a plaster cast or other kind of image of the foot. Rigid orthotics control motion in the two major foot joints that lie directly below the ankle joint and may improve or eliminate strains, aches, and pains in the legs, thighs, and lower back.

Soft Orthotics
Soft orthotics are generally used to absorb shock, increase balance, and take pressure off uncomfortable or sore spots. They are usually effective for diabetic, arthritic, and deformed feet. Soft orthotics are typically made up of soft, cushioned materials so that they can be worn against the sole of the foot, extending from the heel past the ball of the foot, including the toes. Like rigid orthotics, soft orthotics are also made from a mold after a podiatrist takes a plaster cast or other kind of image of the foot. 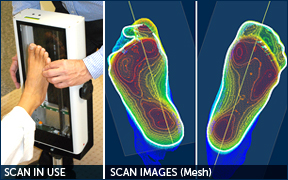 For more information on our Toronto Custom Orthotics Clinic in the Greater Toronto Area (GTA) call Academy Foot and Orthotic Clinics at (416) 465-8737.